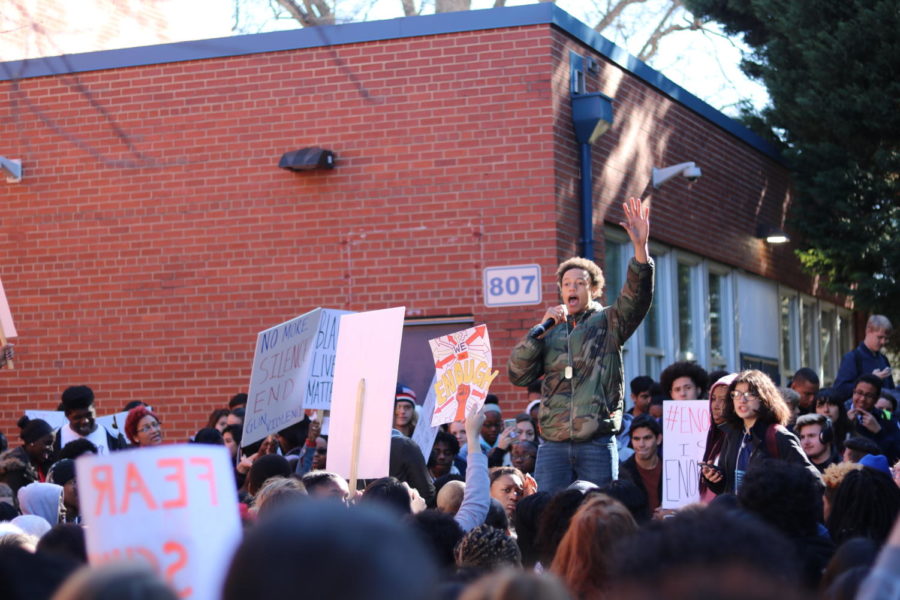 Junior Tyler Jackson delivers a speech to his fellow students.

Students flooded the cafeteria patio in freezing temperatures on the morning of March 14 to participate in the #ENOUGH National Student Walkout to protest gun violence and show solidarity for the victims of the recent school shooting in Parkland, Fla.

The event was spearheaded by members of the Gender Sexuality Alliance (GSA). Junior Alex Donatelli was a lead organizer and opened the event with a speech.

“No one should have to fear for their life at a place where they are supposed to feel safe,” Donatelli said.

A number of other speakers participated in the protest, including junior Kaylee Schwanke, who was inspired by the passion that students brought to the walkout.

“This is a statement,” said Schwanke in a speech. “And it is not one that we are making alone.”

As speakers continued, they shared their messages in many forms. Sophomore Lawrence Campbell chose to rap. In an interview after his performance, Campbell shared a verse that he felt spoke to the issue at hand.

“A tisket a tasket, a little bloody basket. Johnny went to school but he ended up in a casket,” Campbell said.

Students also encouraged their classmates to take action. Several students volunteered to register other students to vote. Others, like Junior Tyler Jackson emphasized the idea that people should be more proactive with issues like gun violence.

Students were supported by the school administration; Principal Rick Parker stood with the speakers and teachers participated as well. The walkout made a statement to both students and adults, seeking change in the country’s gun control policy.

“We must address the heart of the problem,” Donatelli said. “We must fight for stricter gun control.”

View photos from the walkout below