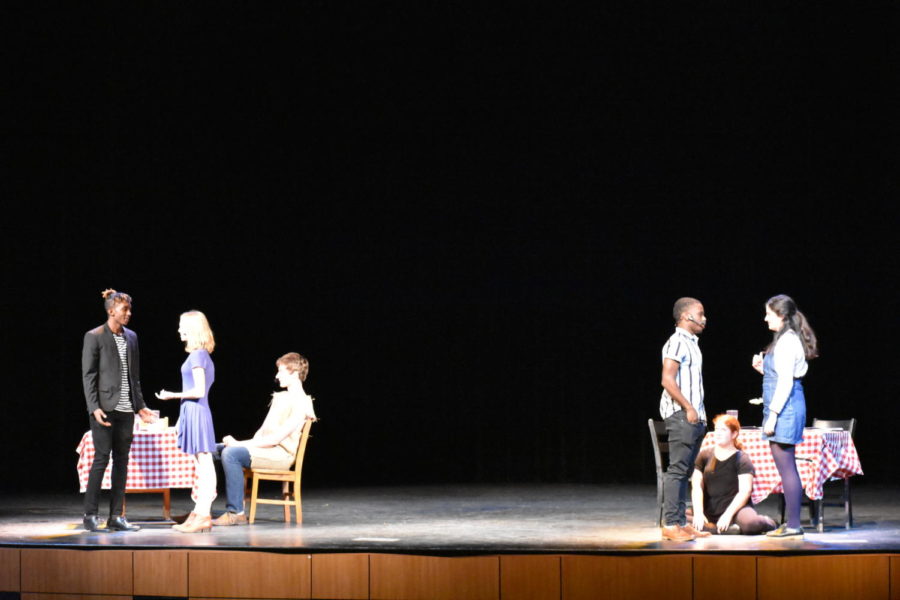 Girl 1 (Kate Carroll) and Guy 1 (Daniel Harris), and Girl 2 (Julianna Kantor) and Guy 2 (Curtis Jones) find each other after many bad dates.

Picture this: you’re on a first dinner date, and your prospective partner starts stealing items from the table. Or, your date looks about 40 years older than she did in her profile. Or, even worse, your date shows up dressed as a mime. All of this happened, and more, during East Meck’s annual winter play Check Please.

Under the direction of East Meck theatre teacher Bernadette Macleod, advanced and proficient theatre students put on a performance of Check Please on Dec. 6 and 7, following the performance of The Audition and a brief intermission. I got the chance to attend and review the show on Friday, Dec. 7.

Check Please was a vignette style play and followed a series of first date fiascos that two girls (Kate Carroll and Julianna Kantor) and two guys (Daniel Harris and Curtis Jones) underwent to ultimately find a match with each other.

Two small, circular dining tables topped with restaurant paraphernalia were placed at each front end of the stage. The set was minimal, but nothing extra was needed — the performers filled the space with their energy.

The play opened with Girl 1 (Carroll) dining at the left table on a date with her first partner, an egomaniac named Louis (Corbin Rucker). The conversation between the two ended with the girl telling off Louis for his self-centered attitude. Then, the spotlight dimmed on the left table and lit up the right one. With every lighting change, the scene shifted to the next date, which featured one of the other three protagonists on their own respective first dates.

Though Carroll, Kantor, Harris and Jones were the main characters in the story, every member of the cast played an equally important role. With every scene change, a new quirky dating option was introduced to the audience. Ranging from a die-hard, aggressive Chicago Bears fan named Melanie (Elizabeth Nava) to a creepy mime named Mimi (Lucy Smithwick), many of the dates were outrageous, to say the least. But with this, every cast member was totally committed to their eccentric roles, which added to the overall comedic, light-hearted feel of the production.

Wilson’s versatility as an actor was seen through his performances in each scene, but his overall commitment to his characters is an accurate representation of how the rest of the cast acted — they put their heart and soul into their roles.

The cast’s performance was fantastic, but I have to give a special nod to theatre teacher Bernadette Macleod. The show was directed to a tee; scene transitions were seamless, the casting decisions were perfectly fitting and everyone on stage looked confident and prepared. The cast acted like a well oiled machine, and I did not notice a single technical mistake or botched line.

Overall, East’s performance of Check Please blew my expectations out of the water. I was impressed by the cast’s passion and ability to “become” their characters. I was most definitely entertained, and the rest of the audience was too, as seen by the thunderous laughter that filled the auditorium for the majority of the show.