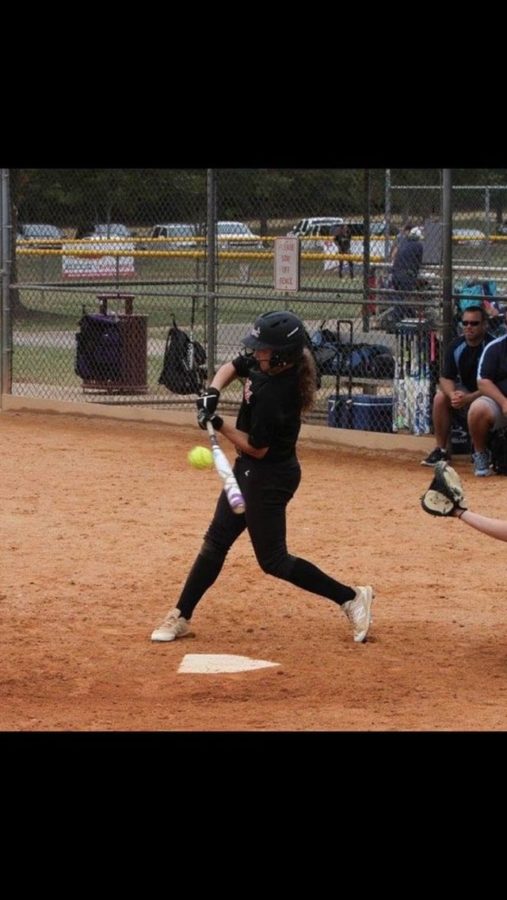 Kasidi Staley hits the ball while at bat in a softball game.

Not many people can say they have played baseball, basketball, softball and soccer at the high school level, but East Meck junior Kasidi Staley can.

Staley has committed to Queens University Charlotte on a softball scholarship. Staley played softball her freshman year at East for the varsity team. The team struggled and ended with an overall record of 2-14, and 2-10 in conference play.

Staley has played softball for most her life, spending many years with her travel team, im proving her game. She even played baseball for a while.

“My travel coach was a big part of my success,” Staley said.

Staley has always had people supporting her, whether it be her friends or family.

“My mom and teammates are my biggest supporters,” Staley said.

She has formed bonds with her teammates and coaches while playing softball, but after her first travel team disbanded, she didn’t feel that softball was what she wanted to do anymore.

“After we disbanded I felt like I didn’t want to play anymore,” Staley said. “I couldn’t find a new team that I liked. I felt like softball wasn’t my thing anymore.”

Later, Staley joined a team called the Carolina Cardinals. To get in shape, she spent her off-season conditioning. Her hard work paid off when she was offered a scholarship to Queens University to play softball for all four years of college.

“Queens offered me the most money to play. There is potential for a full-ride” Staley said.

Softball is not the only sport Staley excels in. She started playing soccer her sophomore year and has played for the Lady Eagles varsity basketball team since she was a freshman. Staley still intends to play softball at Queens even though she doesn’t play for her high school team.

“I fully intend on playing softball at Queens my whole time in college.” Staley said.