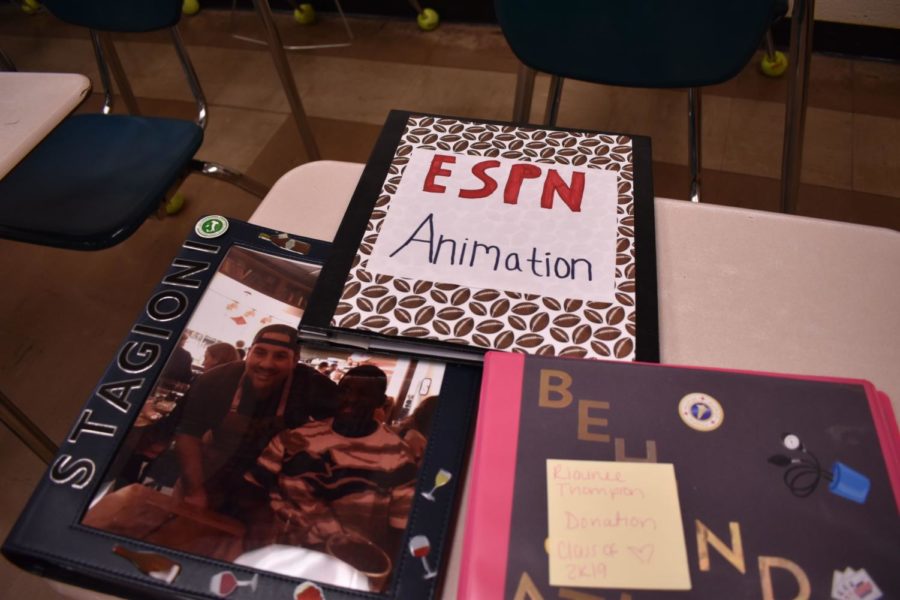 Seniors have the opportunity to explore a wide variety of fields for their graduation projects.

Senior Miguel Hernandez considered himself a shy person, until he finished his senior graduation project. He believes his project was the thing he needed to discover his hidden potential.

“I feel relieved after doing this project. Relieved and hopeful for the future,” Hernandez said. “The project showed me that I am a problem solver and that I have potential. It showed me there’s no definite end [for jobs]. If I don’t like what I’m doing, I can switch to something better.”

The senior graduation project is a district-wide requirement that, as the name implies, is essentially an exit ticket out of high school. Each school has a different set of criteria; here at East, community service is chief. Charlotte Mecklenburg Schools (CMS) requires all high school students to complete this project as part of the curriculum, with the exception being International Baccalaureate (IB) students. Students have the freedom to choose their own topics and are encouraged to choose things related to their future career.

“The project is essentially away to give [students] an idea of what it’s like to be in [their] career field of interest,” teacher Kristopher Majak said. “That’s hard to necessarily learn that in the classroom, so I think they are providing a valuable opportunity.”

Students complete the paperwork and planning portion of the project in their junior year, then the actual service in their. senior year. The project requires all students to keep a scrapbook containing reflections, photographs and a supervisor-signed log of community hours to serve as evidence for their service. That service involves job-shadowing experience totaling at 45 hours, with 15 hours for junior year and30 hours for senior year.

“This project teaches you to learn about a job,” Majak said. “It shows how people act and behave in the workplace.”

According to Assistant Principal Joel Edde, the current incarnation of the project has been a recent change from the old method.

“The old way wasn’t working, so we tweaked the project to what it is today,” Edde said. “Before, students chose a topic from a CMS-approved list and wrote an eight-page essay.”

Edde, a former English teacher, shares Majak’s sentiment for the project and feels that it has much more to offer to students.

“It’s a way for students to explore a career or service project of interest,” Edde said. “This project aims to give students something beneficial for their future.”

Edde views the project as no ordinary service but a good method for narrowing the picks for future careers by weeding out the undesirable potential jobs and teaching students to be more strategic in their future.

“Instead of dropping thousands of dollars on a college education only for a student to say ‘this is not what I wanted to do after all,’ they can learn that by spending 45 hours on this project,” Edde said.

This was true for senior Portia Jones who assisted a real estate agent and witnessed some of the complexities of the job. As a result, she decided real estate would be a good side job but not a future nine-to-five.

“It showed how much work I really had to do because you make so many connections with your clients, which can quickly become overwhelming,” Jones said.

Senior Nora Mehltretter’s passion for children led her to shadow a nurse with the Department of Social Services (DSS), where she observed some of the tragically painful realities of local kids.

“I have always cared about children. I babysit, et cetera,” Mehltretter said. “It was tough to learn about all the terrible things children have to go through every day. It broke my heart. But, it showed me that DSS doesn’t
necessarily want to take the kids away. In many cases, they have to.”

On the yearbook staff, senior D’Andre Thompson was exposed to the vast world of photography through his graduation project, which allowed him to benefit the school.

“Generally, I’ve been a very artistic person, but for mixed media mainly,” Thompson said. “But, working with photography helped me make the yearbook look better.”

While the project was an artistic endeavor for some, it was life-changing revelation for others. Take the case of senior Zac Altman, who was inspired by his project to be an entrepreneur.

“Doing this project motivated me to own my own business,” Altman said. “The project taught me that working for myself is far better than working for others.”

All of this work culminates in students’ senior year in the form of a formal presentation given be-
fore three judges who are typically part of the school staff, the community or are East alumni.

“Every presentation ends with a question-answer session and a casual conversation,” Majak said.

This project is facilitated by teachers in the English department and accounts for 20 percent of students’ fourth-quarter English grade. This means that if this project goes neglected, that failure show up on students’ transcript and will be detrimental to their overall English grade. But, Edde believes that it is not all work.

“There’s no doubt that this project is work. But, it’s also passion,” Edde said. “[It] takes passion and points it in the right direction.”