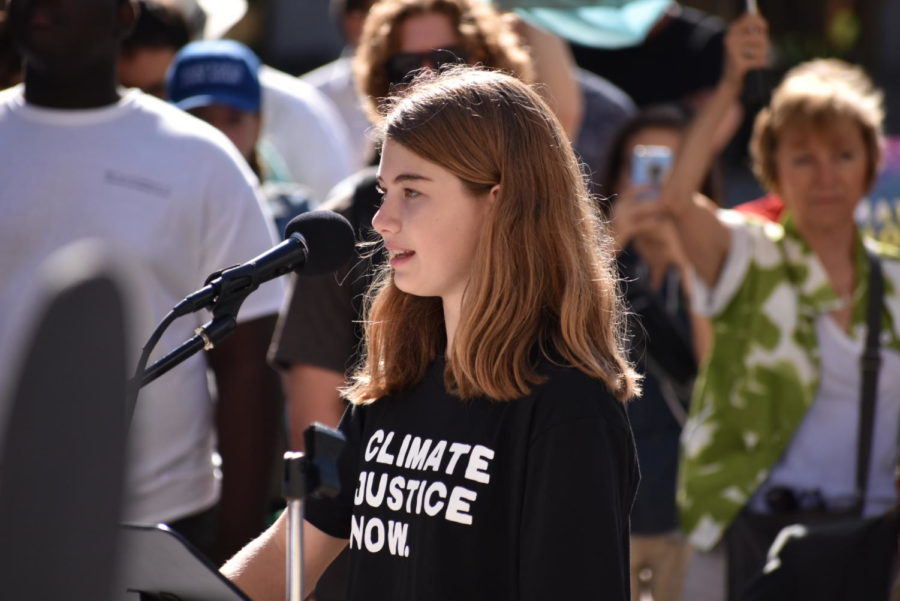 14-year-old Mary Ellis Stevens has been skipping school every Friday for 24 weeks to strike against climate change. On Sept. 20th Stevens was striking here in Charlotte, outside of the Charlotte-Mecklenburg Government Center.

Stevens has struck alone before but this time she was joined by multiple guest speakers and around 300 students and citizens, all of whom had ignored other responsibilities to show up in protest of government inaction on climate change. The strike here in charlotte was only one in hundreds, as millions of students and workers around the world struck against climate change.

“[I am here] because I think it is absolutely imperative that we act, we can’t just go on piddle-paddling around. Too much talk and nothing happens, yes words are important but actions have to come from that.” says a Joyce Alexanders “I’m too old, I’m here for my grandchildren,”

Two of the speakers were 14-year-old Kate Harrison and 13-year-old Lucia Paulsen, who were also responsible for organizing the strike along with Stevens. Harrison and Paulsen had three demands, a new Green Deal, respect of indigenous land and sovereignty, environmental justice, the protection and restoration of biodiversity, and the implementation of sustainable agriculture.

“[I’m here] to support and come together for this initiative to make mother earth a better place,” says Vincint Polinar

Among the speakers was former Charlotte Mayor Jennifer Roberts, who spoke out in support of the youth. “The third graders you hear today, by the time it’s 2050 they’re only going to be 40 years old. In the prime of their family life, they should not be dealing with food shortages and island countries disappearing and climate migration that is overtaking every country in the world.

Once the speakers finished the attendants marched around the Government Center chanting slogans such as ”The oceans are rising and so are we!” The strike then concluded with a “die-in,” where protestors laid down on the ground as if dead due to governmental inaction.

“Make your voices heard, continue, tell every adult who can vote [..] contact the officials because until the officials hear from the people they do not feel compelled to act,” says Jennifer Roberts