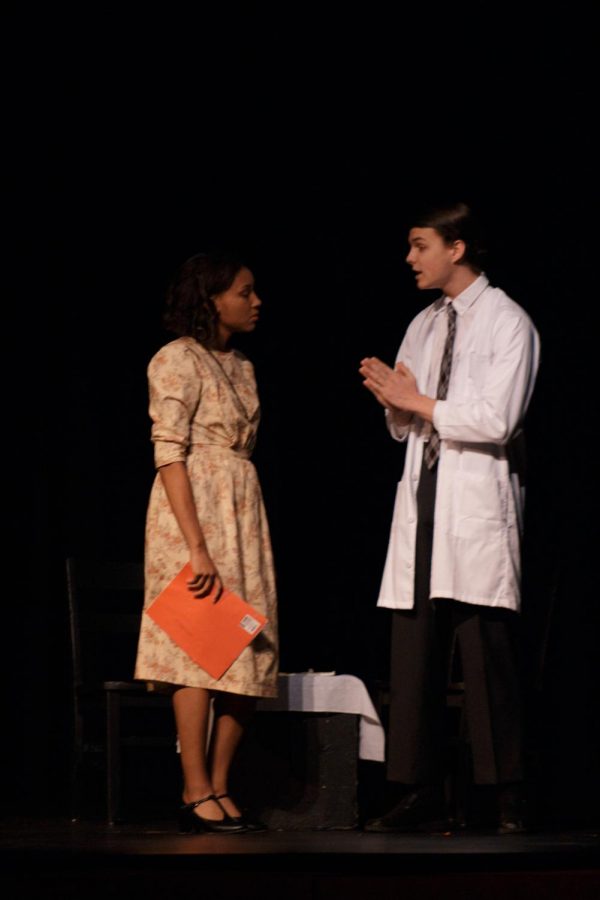 The lights dimmed as anticipation grew while many audience members waited to see their loved ones perform an act that they had been practicing for weeks at East Meck.

Practicing for the North Carolina Theatre Conference (NCTC), a high school play festival for students from all over the state, the opening night performance of Radium Girls went without the use of microphones.

“Being adjudicated by other theatre artists is really helpful for [the students] as they grow as artists,” said theatre teacher and director of Radium Girls, Bernadette Macleod.

Radium Girls follows the story of female workers in a radium factory. The females develop illnesses and work to find the reasoning behind their ailments.

At any age, it is very common for performers to get stage fright, especially when it is their first time performing a given role.

“I was definitely very nervous. If you saw me backstage, I was jumping around like a little kid,” senior Tyller Mensa said.

Despite her admittance of being nervous behind the scenes, Mensa seemed calm and comfortable on stage. Mensa played a major role in the development of the probing attitude presented throughout the play as she portrayed a key character, Katherine Wiley.

Senior Ben Wilson arguably had the strongest performance of the cast, portraying businessman Arthur Roeder. Wilson gained the recognition of those viewing the performance as well as standing out as a strong performer to his castmates. His ability to switch his attitude completely to fit the scene from one moment to the next was very convincing and impacted the outcome of the show as a whole.

“Some people will say their entire line in one [tone]. I think it’s really important to understand that even as we’re talking, we change our intonation. I think I do a pretty good job of that,” Wilson said.

In spite of difficult circumstances, Gloria Boykin had a well developed character and performance. Under a short time constraint, she memorized her lines and portrayed Kathryn Schaub in replacement of a student who was unable to perform.

“We had to bring her in the week before NCTC. She had no idea of any of the lines, she memorized them… and that was impressive,” Wilson said.

With debut performances, it is not uncommon to have worries about what may go wrong. The kinks that performers work to fix before their performances may not all be obsolete.

“The only thing that, as a theatre teacher, I feel like students need to work on better is projection and articulation,” Macleod said.

More practice could have been done in terms of projection of voices for some characters at small moments. These moments were mainly found during the first two scenes.

Since there were no microphones, it would have been beneficial if some performers had spoken louder so those in the audience could hear them more clearly in order to follow the early stages of the plot.

The usage of a particular grey wig stood out and threw off the flow of the play as it caught much of the attention as worn by Dr. Knef, portrayed by senior Lucy Smithwick. The costume and set designs were well established throughout the play except for the grey wig, which made the particular scene seem more comedic than anticipated for a short period of time.

There was one transition in particular where there seemed to be an unnecessarily long break between lines and the dimming of lights between scenes. Those in the audience briefly looked to their sides in confusion before the lights had gone off for a transition in scenes. This was forgotten by the audience shortly after as the characters in the following scene made up for it with their acting.

Something else that stood out, but in a good way, was the portrayal of Dr. Von Sochocky by junior Gabe Stanton. As the only performer who spoke in an accent, Stanton was able to professionally alter his tone in a way that made for different attitudes in his speech while maintaining his accent.

All in all, the East Meck production was full of energy and confidence by all performers as they depicted well thought out character roles and attitudes that made the play easier to follow as the plot went along. East Meck’s theatre department should be proud of themselves for their performance of D.W. Gregory’s, Radium Girls.

The next major performance by the theater department to be conducted will be the musical Rent, set to be on stage Feb. 20-22.