Coronavirus causes all major sports leagues to shut down 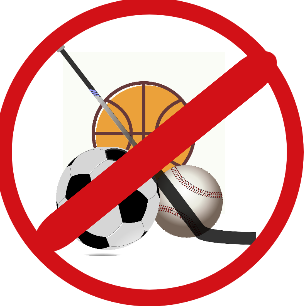 This truly is March madness.

On March 12 the entire sports world came to an abrupt halt. The cause of this sudden stop is the COVID-19 virus aka Coronavirus. Following a confirmed case of the virus in NBA player Rudy Gobert, the NBA decides to suspend the entire NBA season for the time being. Within the next 24 hours, the NHL, MLB, and XFL all suspended their seasons, also the NCAA announced that all conference tournaments were canceled as well as the NCAA tournament.  This is perhaps the darkest time in U.S sports history

This move by all the leagues has left the sports world quiet and empty. Before Wednesday it was looking as if everything was going to be moving forward, with a few exceptions like the warriors playing without fans. That all changed when Gobert was confirmed to be infected. His case set off a chain reaction that not only suspended or canceled all pro sports but also school sports in CMS and the entire state of North Carolina.

These decisions aren’t surprising after the NBA made their statement confirming Gobert, in fact, did have the virus. This put the league in a position where there was no other choice but to suspend the season since it is unclear how long Gobert had the virus. In the previous five days before it was revealed the virus could be linked to all 30 NBA teams putting every player at risk of having the virus.

“We made this decision to safeguard the health and well-being of fans, players, everyone connected to our game and the general public. This hiatus will last at least 30 days and we intend to resume the season, if and when it becomes safe for all concerned,” Commissioner Adam Silver said in a letter to fans.

The rest of the sports world felt the pressure and followed in the NBA’s footsteps even without any confirmed cases. The Gobert situation just proved to everyone that the athlete’s aren’t safe from the virus even if fans aren’t in attendance.

Many believe that this is an overreaction by the leagues, but it’s not. This is a serious pandemic that has been a problem around the globe and now it’s starting t hit the U.S hard. As disappointing as it is to not be able to watch the NBA, the NHL, or the March Madness tournament right now, fans need to look beyond the sports aspect and look at the public health side of the situation. Even though the athletes aren’t the most at-risk demographic many coaches, officials, and executives fit into the age range where death is a possibility. So in order to keep everyone safe suspension is the only way to go.

All leagues with the exception of the NCAA will revisit the possibility of continuing at a later date, but if the spread of COVID-19 doesn’t slow down we could be without any sports at any level for a long time.