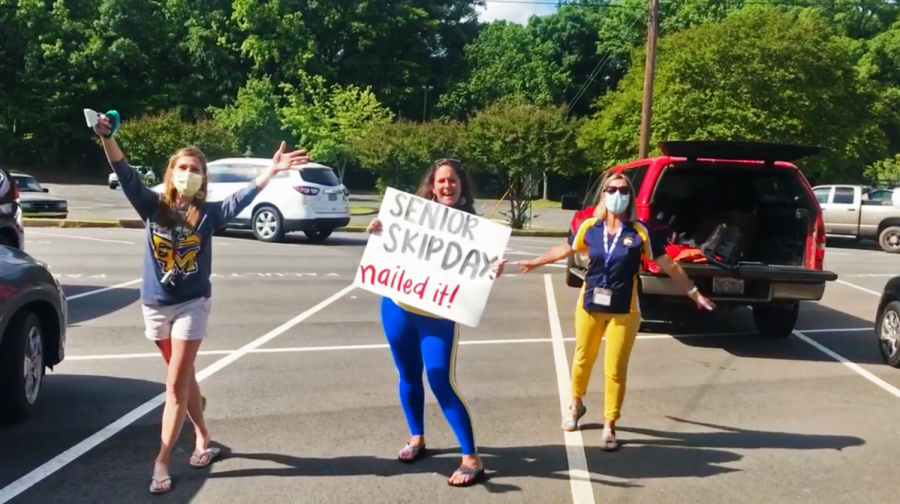 March 13. The last day of the 2019-2020 school year. The closure of schools and allure of a longer summer seems to hide the reality of seniors not being able to say goodbye.

COVID-19 has ravaged the community at an astonishing pace, severely changing the way of life for most people. Many lost jobs, others had a complete change of scenery. Either way, everyone is being affected by the outbreak in some life-changing style.

Traditions such as painting ceiling tiles, walking the stage at graduation or even being able to pose with friends when announcing commitment to a certain university have been either indefinitely postponed or canceled for seniors due to the need for social distancing. What hits many is the envy of not being able to have the classic experience that the seniors have been waiting for and working for over the course of seven challenging semesters.

Some seniors have experienced more difficulties than just event cancellations however. Senior Andrea Aguirre has had her life shifted away from the norm because of interrupted travel due to the disease.

“My mom’s been out of the country visiting family in Colombia and she’s stuck there because all international travel is banned,” Aguirre said. “The uncertainty of the situation has been making me feel generally sad but also angry when I see people who aren’t doing their part in flattening the curve in our country.”

Another concern is the inability to have a final sports season, a last choir concert or a senior prom. Seniors Maddie Shober and Matthew Mair are just two of many examples of ambitious seniors who have worked for four years to achieve this final display without being able to see it to fruition.

“I was injured last year and had to sit out of my junior soccer season, so I was so excited to have my time as a senior,” Shober said. ‘I worked so hard to heal my knee, and then [coronavirus] cancelled most of the season.”

“I’m really disappointed that all my senior events like prom and my last choir concert are getting canceled, but I’m trying to make the best of it,” Mair said. “What really hurts the most is not being able to see my friends. I might not be able to see some of them before school ends, and even if I do, it will have to be under quarantine.”

Another major blow to an upsetting path is the cancellation of an in-person graduation. CMS assembled a task force of students, parents and teachers to decide on an alternate plan, and came up with a solution.

After extending the link for a survey allowing students and parents to submit ideas, CMS has decided to “hold prerecorded virtual graduations that will feature the elements of a traditional ceremony, including speeches by distinguished visitors, the valedictorian, salutatorian and senior class representative; and the reading of each graduate’s name with available photos. Students and families will be able to watch a virtual graduation prior to receiving their diplomas, which will be provided during a drive-through ceremony. A future school-based celebration will also be held for graduates.” See the full statement at bit.ly/CMSgraduation.

Since high schools in the Charlotte-Mecklenburg Schools (CMS) system have switched to the pass/fail system for seniors and Governor Roy Cooper has canceled in-person schooling for the remainder of the year, the next thing graduates have to hope for is the reopening of the state, which is taking place in phases, and eventually colleges and universities staying open for the fall and spring semesters.

As of May 22, NC has reached the end of phase one, which extended the Stay At Home order and opened some businesses and recreational spaces. On May 22, phase two lifted the Stay At Home order and reopens select businesses, as well as salons and pools, houses of worship  with limitations and some outdoor venues, parks and beaches, but encourages the concept of Safer At Home. Limits have also been placed on gatherings of people inside and outside: 10 indoors, 25 outdoors. Phase three will include lifting restrictions on more vulnerable communities and increasing capacities for restaurants, entertainment venues and houses of worship, but expect changes.

One fear that some seniors have expressed is society’s reaction to the crisis. In senior Emmett Thornburg’s opinion, the measures that the country has and has not taken are cause for concern.

“I’ve never been one to fear a disaster that ruins the way we function, but after the reactions to coronavirus, I’m not sure if people would be able to come together and fight something that was worse,” Thornburg said. “So many people are living paycheck to paycheck in our country and I feel like a blind eye gets turned to how terrible the distribution of wealth is. Clearly we are not equipped to handle large economic setbacks and this one is going to result in more hardships to come.”

No matter what happens, the seniors interviewed seem to agree that the best thing to do is look to the future. Senior Tyller Mensa believes that as long as her peers keep looking for the silver linings in the situation, the class of 2020 will end up fine.

“The best thing we can do is make the most of what we had and look forward to the future, when this is all over,” Mensa said.