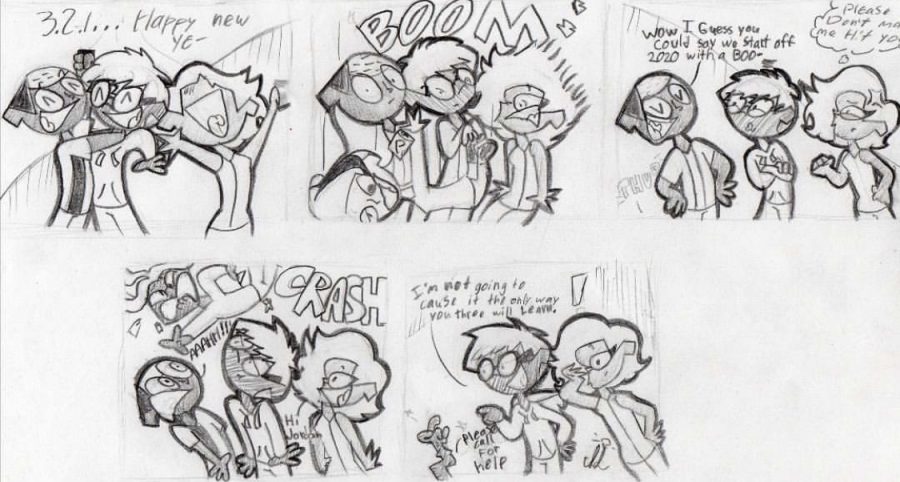 Upon finishing his classwork, junior Isaiah Luzayadio sets his school books aside and withdraws a folder from his backpack. A portfolio full of his own panels, stories and sketches, Luzayadio can now continue his narrative where he left off.

Anywhere between classrooms and lunch periods, Luzayadio can be seen sketching original characters from his own stories. In his free time, he doodles to practice a variety of expressions and poses, much to the pleasure of those around him.

“I didn’t get into drawing until the sixth grade. I started with the show ‘The Amazing World of Gumball’,” Luzayadio said. “I watched it, got inspired by it and I have been drawing ever since.”

Gumball, the British-American cartoon first released in 2011, is often recognized for its surreal settings and distinct choices in character design, combining real photography with varying styles of drawings and animations. Among Cartoon Network’s more popular programs of the decade, it brings a multitude of Western drawing styles to the often monotonous slapstick genre.

“I like the really angular early 2000s style,” Luzayadio said. “A bunch of cartoonists inspire me, like Jorge Gutierrez and Craig McCracken.”

El Tigre and The Powerpuff Girls, popular works by Gutierrez and McCracken, contribute to the familiar and defining animation style of the 2000s. The angular feel, characterized by rigid lines and geometric shapes, is familiar to anyone who grew up watching Nickelodeon or Cartoon Network.

Luzayadio takes advantage of his drawing ability and uses it as a platform for his perspective and message, following and illustrating stories which integrate hot topics like race and gender.

“I want to spread diversity through sexual orientation, race or culture,” Luzayadio said.

Multiple stories are currently being written by Luzayadio, including Mission Therapeutic, a “pro-LGBT comic” and Part Time Powerhouse, the pilot of which should be finished by winter.

“When I draw I like to share it because it usually has a message,” Luzayadio said. “It’s OK to not be perfect.”