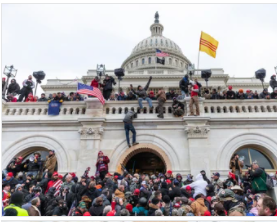 Wednesday, Jan. 6 is the day that fanatical Trump supporters stormed the Capitol of the United States of America. It is a day we will never forget. A day when those who claimed to love our country most turned not only to violence but to treason. A day when every American could plainly and clearly see the effects of years of hateful and fear mongering rhetoric.

And make no mistake, we know who to blame for this.

After Congress resumed its joint session to count the Electoral College votes, many Republicans harshly condemned the violence and chaos. Vice-President Mike Pence denounced the protesters, saying “You did not win. Violence never wins.” Kelly Loeffler, who was originally planning to object to the certification of the election results, changed her mind. “The events that have transpired today have forced me to reconsider,” she said, “and I cannot now, in good conscience, object.” Ben Sasse, a frequent Trump critic, said, “There are some who want to burn it all down. We met some of them today. But they aren’t going to win … Organize, persuade, but most importantly, love your neighbor.”

But let’s dig a little deeper. In a speech in Pennsylvania before the 2020 election, Mike Pence said murders and shootings in Pennsylvania were “just a preview of Joe Biden’s agenda,” and that “the truth is you won’t be safe in Joe Biden’s America.” In a letter to the president of the Women’s National Basketball Association, Kelly Loeffler called Black Lives Matter “an organization that seeks to destroy American principles” and promotes “violence and destruction across the country.” And as much as Ben Sasse may be a critic of President Trump, he is a vocal proponent of Immigrations and Customs Enforcement, and opposes sanctuary cities, saying “MS-13 thugs can’t get a free pass.” For all their useless attempts to rehabilitate their image and distance themselves from the mayhem they helped cause, Republican politicians have been complicit in sowing fear and hatred. And the American people must now deal with the aftermath.

Some say that both the right and the left are the problem, and that both sides are equally to blame for this country’s toxic political discourse. Obviously, neither side is perfect, but in June 2020, as protests against police brutality were at their height across the country, CNN host Van Jones said that right and left “need to come together” to fix the issues with police brutality. Meanwhile, Fox News host Tucker Carlson had this to say:

“This may be a lot of things, this moment we are living through, but it is definitely not about black lives. And remember that when they come for you, and at this rate, they will. Anyone who has ever been subjected to the rage of the mob knows the feeling. It’s like being swarmed by hornets.”

Is this the state of political discourse now? Fox News pays Tucker Carlson $6 million a year to go on prime time and lie; to tell conservatives that Black Lives Matter is “poison,” and the “mob” is going to get them if they don’t do something.

Did he not expect people to believe him?

We can condemn the protesters at the Capitol all we want. We can call them rioters, we can call them terrorists, we can call them insurrectionists. And don’t get me wrong, we should. But if we don’t address the systemic issues responsible for this crisis, if we don’t hold the politicians and pundits who fueled the fires of violent right-wing extremism accountable, it’s going to happen again.

Actions have consequences. And we can only hope that those who contributed to our country’s current dire state will face the repercussions.